Monday, we took Parker back to Egleston for his CT-Angiogram.  Going into it, I didn't know too terribly much about how it would go, only that it involved injecting dye via an IV, then him "shooting through the tube", as it were.  Having had a regular CT scan myself, hooray kidney stones, I knew it wouldn't take too terribly long and that he would need to remain still, which would probably involve giving him some twilight drugs and strapping him down.

Mike and I were NOT PREPARED for the several hour ordeal that it turned out to be.   It became clear pretty quickly that they were planning to put him all the way under for the duration of the scan, which is a lot easier said than done for a kid with Parker's history.  We had to watch the informative videos about sedation and contrast injections, which do a great job of outlining the worst case scenario in which your child will die instantly during a routine exam.  We weren't too bothered by those, 'cause we've been around the block a few times and have heard the worst case scenario more times than I can count.

I did start to get freaked out when the anesthesiologist came in and ran through the extra risks Parker faces during sedation that normal kids don't.  He has a compromised respiratory system, which increases the likelihood that he won't be able to breathe on his own through sedation and will require bagging or even intubation.  He has a history of both tachycardia and hypertension (although resolved long ago), and injecting him with propofol could throw his heart into cardiac arrest.  "Propofol?  Like, Michael Jackson overdose Propofol???"
Indeed.
They first had to give Parker an airway exam, and contemplated a chest x-ray, before they would even consent to sedate him. They were all very kind and very sweet and explained everything very well, but it was just much more involved than Mike and I were prepared for.

They let us hold him until the propofol hit, which took all of 30 seconds. He went completely limp, and my mind immediately went back to the first month of his life, when he was medically paralyzed-- it looked the same.  Floppy baby, mouth hanging open, eyes rolled back, just awful.

They ushered us out pretty quickly and had us wait in the recovery room.  "Three minutes!" they said.  It took more like twelve, and I tried so very hard not to panic.  I was so easy breezy headed in there, but all of the "we aren't sure he's even a candidate for sedation" talk had me on edge, to say the least.

They finally wheeled him back in, and they said, "Since it's his naptime, he might sleep for a bit... Oh-- no-- here he comes!"  Sweet Pnut, who burns through IV narcotics like they are KoolAid, woke up almost instantly. Well, sort of. He spent a good five or six minutes singing at the TOP. OF. HIS. LUNGS.  Our sweet nurse was trying to give us discharge instructions but was constantly interrupted by

"If you notice that he seems sluggish...

Eyes completely closed, rolled on his side, singing his heart out.  I tried so hard not to laugh, but the entire radiology department was giggling.  Poor booger.

He finally came out of it enough to eat some graham crackers and drink some juice, which meant we were free to go.

A wee bit stoned, but at least he's mellow.

We got the heck out of dodge, and of course had donuts on the way home.  We hope to hear nothing until our surgeon appointment August 8th.  If he calls before then, it's because he found something to be concerned about.  No thanks! 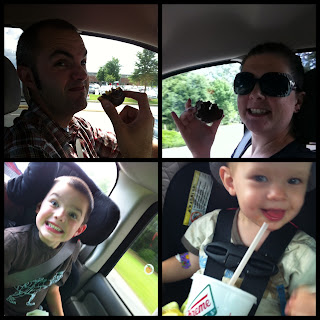 Yesterday we took the minions to see Despicable Me 2, which was adorable.  Jeremiah loves to go to the movies, and Parker did great for his first trip.

Today, I took Jeremiah to get fitted for his ringbearer's tuxedo for Cousin John's wedding in October.  The salespeople made quite a fuss over him, and he ate it up with a spoon.  He loves to dress up, be it in costumes or "handsome clothes", and he is so excited.  The shiny shoes were his favorite part.

Sweet boy.  Being a fashion plate can be exhausting.