We here at the Knoll house don't mess around when it comes to Thanksgiving.

In the last few days we have (in no particular order):

Someone said to me, "Those are so cute!  How nice that you have time to do things like that!"
*backhanded compliment :-)*

I present you with Chief Leaping Bullfrog!

4) spent a day on a cattle farm, thumping about in the hay

Sister made fun of my outfit.  "Farm chic!"

The P-nut was relegated to the barn.  Hayride next year!

5) journeyed to our cabin at Lake Rabun

Thankfully, Parker and I have managed to dodge it thus far.


7)  made a GIGANTOR cake for a banquet

8) cheered on the Dawgs

Not sure how we're going to handle being out of town on Saturday...

9) run around the state of Georgia like chickens with no heads, but 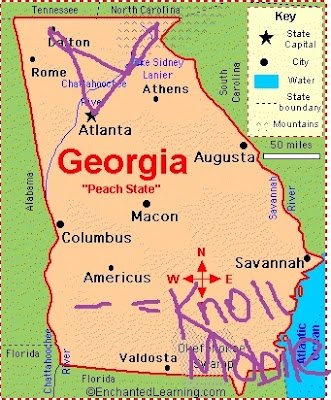 *I actually said the blessing for this meal, and my hives and armpit sweating were not too bad!  I guess that's what happens when you talk to Jesus as much as I have this year.*


It was a wonderful holiday week, minus the stomach virus that thankfully was out of our house in 12 hours.  We are so very blessed in so many things.  We have a tremendous family, and every one of those 4 meals was special in its own way.  Few people are able to be as close to their families as we are, and I love it.  We have a house (disaster though it may currently be), we have cars, we have heat, we have clothes, we have just a wee bit of extra money to have fun with, we have food (So. Much. Food.), we have friends, we have our boys.  We have EVERYTHING.

**Side note: It just amazes me how quickly our focus shifts from full hearts to full hands.  I don't know when I became the old lady waving a stick in the front yard, but for some reason, this year in particular, I am just DONE-ZO with the gimme gimme gimmes and the LOOK WHAT I BOUGHT FOR MY KIDS!!!!!!!!!  I have to be careful not to put on my Judgy McJudgerson pants and leave each to his own.  But for the love of pete, I am tired of the "Put more under your tree!" ad campaigns and the Dudley Dursley-esque "How many presents this year?" mentality.  Rant over.  But I still shake my old lady stick at you.**

After such a week as this, it is a grand and glorious thing to realize that I can relax a bit.  It is far more grand and glorious that my maids come tomorrow.  But the GRANDEST and MOST GLORIOUS thing is that Mike and I are leaving Thursday for a weekend away at Disney World.  Cannot cannot wait!!
Posted by Abby at 11:11 PM 2 comments:

Today is Parker's "Flip Day," which I am not sure is a technical term, but I have decided to make it one.

He has officially been home longer than he was in the hospital!!  90 days is a long time in a hospital, but 91 days at home is just the beginning!!

Parker was MOST happy with his 3 specks of glaze hat he got to eat. 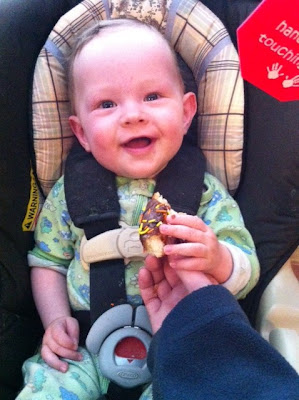 *note our new friend the "RSV Stop Sign" that hangs on his carseat.  Fun times!*

It's funny, because it feels like he's been home forever... and I just can't remember spending that many days down at Egleston.  I honestly have blocked out so much of our time there.  I spent my morning looking back through pictures and re-reading my blog, and while it reopened some old wounds, I was completely overcome *again* by God's grace and provision for our family during Parker's ordeal.  As scary as it was, and as close as we came to losing him, we knew without a doubt that God had His hand on us and on Parker, no matter the outcome.  And I know that He continues to do so.  He will always.

My Tuesday of this week started out so very delightful:

Starbucks in hand, kiddos at home with the Hubs, and a day to myself to get last minute Halloween things finalized.  I enjoyed myself thoroughly, and got home around 4 pm.  The very second I picked Parker up, I knew he had a fever.  Sure enough, he was running around 101.  He had a runny nose, and he was grouchy.

As it was pretty darn close to closing time, and given the fact that he's medically fragile, the doctor said to go on to the emergency room.  This was not entirely welcome news, but I was secretly grateful that they felt the same sense of urgency that I did.  So, we hopped into the car and headed back down to Egleston.  'Cause, you know, we haven't spent enough time there.

*Insert shout-out to my grandmother JeanJean, who very willingly played last minute babysitter to Jeremiah.  So grateful to have her house within just a few miles of the hospital, and so grateful for her willingness to help! Love you!*

Within seconds of our arrival, we were ushered back to a room.  ECMO status enables you to blow right by the full waiting room.  Sorry, other kiddos!  Except not really.  Parker was suited up in the most ridiculous gown ever, and we were seen by a doctor who I feel was 13 years old.  Doogie Howser style.  Either that, or I am old.  I think it might be the latter.

Anyhoo, he didn't seem to alarmed by his initial assessment of Parker, only that there was a pretty mild ear infection present in the right ear.  To be safe, he ordered a chest x-ray.  (I feel that we will get chest x-rays any time we visit the hospital for any reason.  I am okay with that-- Parker's surgeon wanted a follow up chest x-ray every 3 months, and we would be due for another in a week and a half.  Nice to go ahead and scratch that off the list!)

The x-ray came back clear, and we were dispatched with a script for The Pink Stuff and permission to treat with Motrin as needed.  Much hulabaloo for not too much drama, but we'll take it!  Parker was just happy that the x-ray tech gave him a Superstar balloon.

Needless to say,my evening of Halloween prep was foiled.  Wednesday, during the day, was Jeremiah's Fall Festival at school.  He had a BLAST!  This is a truly landmark moment in the life of a preschooler-- they go around to centers and play games and collect prizes and play in a jumpy house.  He has been asking for WEEKS when it would be here, and he was so very thrilled when it was time. 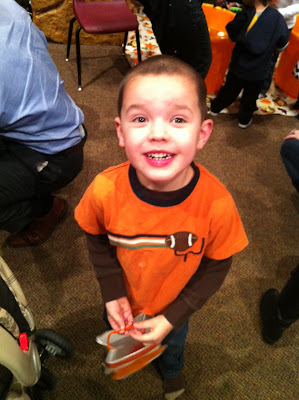 This was as still as I could get him the entire time.  Such joy! 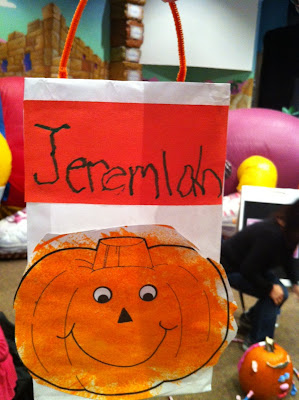 Sweet lil' treat bag with his sweet lil' handwriting.  It kills me. 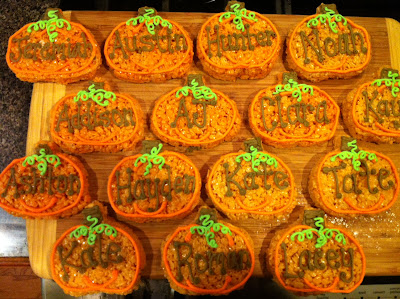 I am room mom again this year, so I made these rice krispies treats for the kiddos.

I had little to no time to get our costumes squared away.  Thankfully, Jeremiah's was pretty cut and dry. 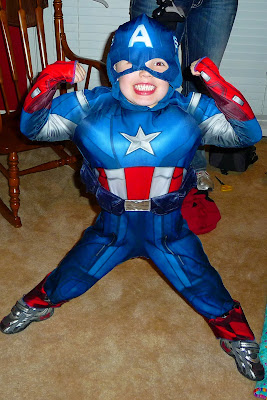 This is the first year I haven't made his costume.  My heart was a little bit sad!

I had approximately 2 hours of naptime to get the rest of us ready to go...
2 hours, 4 pieces of felt, a glue gun, and some electrical tape?  Surely I could make an entire Avengers squad in such a timeframe.  A Black Widow fascinator for me, a quasi-IronMan shirt for Mike (yay tap lights!), and a hat for the Pnut. 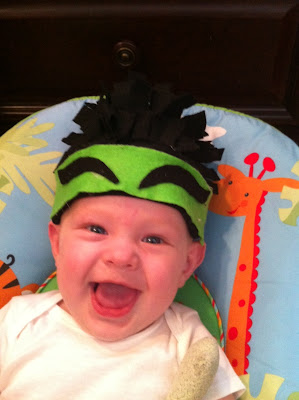 "You won't like me when I'm angry!!" says the Hulk through his giggles.
Worst Hulk ever. 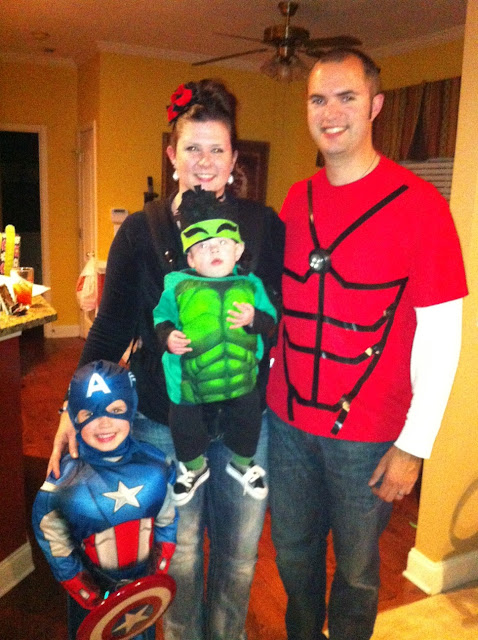 It just tickles me to pieces every time I look at this picture.  Especially the fact that Parker is rolling his eyes.

Not too shabby given that we spent the night before in the emergency room.
We had a delightful time trick-or-treating with Sister's family, and yet again Mike and I went to bed saying,
"We really are very blessed, aren't we?" 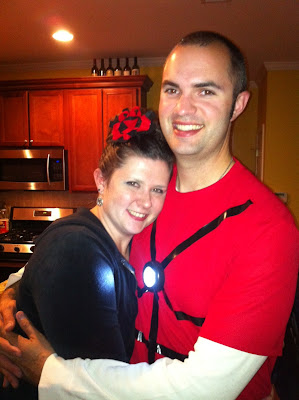