The time is upon us!  One week from today, Hubs and I will be southbound with the hammer down for Marathon Weekend! (kid free for the weekend!  woowoo!)

The long answer is, "I will never be ready.   Ready implies that I have trained to the maximum, creating in my body a finely tuned athletic machine ready to go forth and conquer 26.2 miles with no sign of apprehension, only full of confidence that I can and will finish this race in a respectable time.  My ready score is at zero.  Instead, I have trained as hard as I can, through sickness, holidays, and being a mom.  The only athletic machines to which my body can be equated are those shaky belts they used to wrap around people's hips to jiggle the fat away. I have absolutely zero aspirations of any sort of respectable time, only somewhat middling confidence that I will finish in under 7 hours which is barely walking speed."

The truly sad part is that I usually find myself apologizing to others (all of whom initiated the conversation to lend support and encouragement and get dragged into Crazytown) in advance for even attempting this foolishness.  I spend way too much time talking about how I'm not actually a "runner" so much as a "mover".  How I might not technically "belong" at that race with actual runners. I hope it doesn't come off as fake humility, 'cause it's not.  I am slow, SLOW SLOW SLOW, and I walk a lot.  For some reason, I feel like I should apologize for that and that's dumb.

There are fifteen gazillion things I could be doing to get myself feeling more ready, but instead I have decided to focus on 4 of them and leave the rest to chance.
1) Music list (help me!  Need suggestions! I need everything from church music to punch you in the face music!)
2) Last minute shopping for race day essentials
3) Oufit (you run move faster if you look cute)
4) 3 more short runs

Mid-December, we took Jeremiah to Disney World to celebrate his fifth birthday.  There was some initial confusion, the blame for which can be laid squarely at Mommy and Daddy's feet-- "You get to spend your birthday at Disney World!" somehow translated to "You are having a birthday party at Disney World and should invite all of your school friends, teachers, and Sunday School class!"

We set off, just the four of us, for a quick little weekend trip that wound up being one of my favorites in my 32 years of vacationing there. 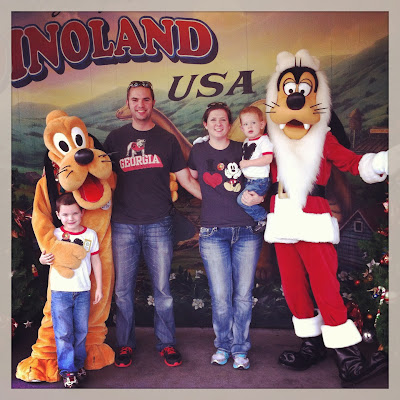 Disney World at Christmas is truly spectacular.  The attention to detail that goes into the decorations in every nook and cranny is remarkable.  It's something everyone should see at least once, which is obviously an opinion shared by many as Christmas is one of the busiest times of the year. 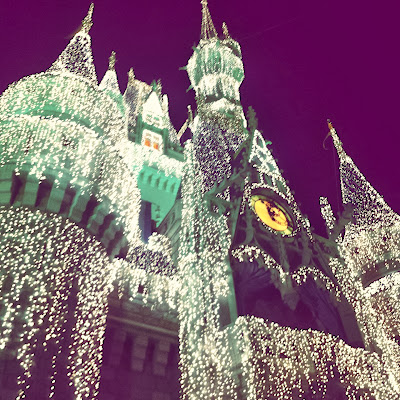 We timed it just right and went Friday-Tuesday, December 13th through 17th.  Crowds were great, especially Sunday night and Monday!  I have gotten eleven million requests to share "How the Knolls Do Disney", which I plan to do in a couple of installments here.  For now, however, I MUST MUST MUST share with you the highlight of our trip:

It's something I've never done, but always wanted to.  Since we were celebrating a special occasion, we added the ticket to our plans.  It is a separate ticket, which means that it is NOT included in your regular admission ticket that day.  The Magic Kingdom was closing at 7 pm, and from that point on, only people with MVMCP wristbands would be allowed to stay on.

We opted not to cash in one of our park day tickets that day, and instead slept very late (we were out until midnight the night before), and instead spent the morning on the monorail/ferry boats taking the Christmas Tree-Gingerbread House tour. 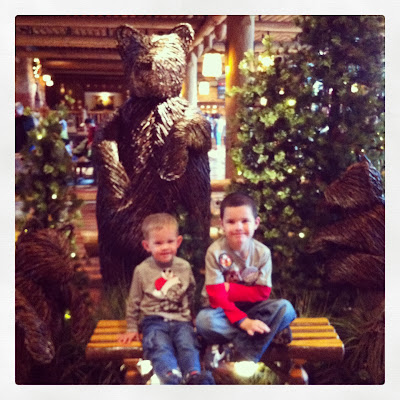 The Wilderness Lodge is our home resort, and it will forever and always be my favorite.
ESPECIALLY at Christmas! 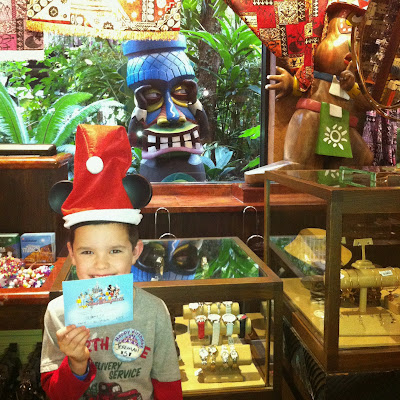 Tiki Trek at the Polynesian! 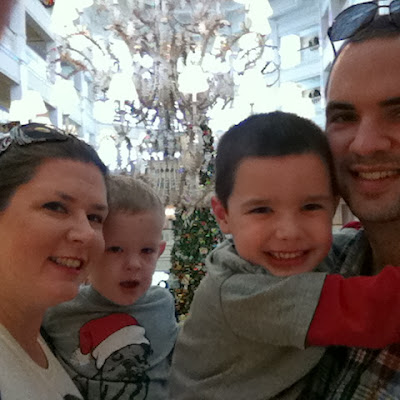 Grand Floridian Fun!  My retirement job shall be to work inside the gingerbread house, making treats for wee ones.

We headed over to the park at 4 pm, which is the earliest you can get in with a MVMCP ticket.They set up separate lines for ticketholders, and gave us our wristbands, and we were ready to go!
**slight aside-- TOO MUCH WRISTWEAR.  Magic Bands (more on those later), a watch, plus a Christmas party band= overaccessorizing.  Ridiculous Mouse hats= not overaccessorizing.** 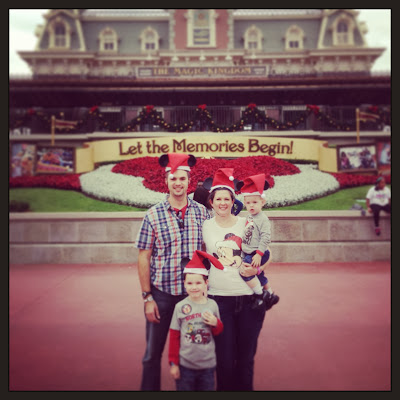 Sometimes you just slap a Dollar Store Santa hat onto your existing ears and call it a day.

We had SO MUCH FUN.  So much so, that I forgot to take pictures.  They did a fantastic job of shooing everyone else out, and by 7:15 the place felt downright empty.  To give any Disney insiders an idea, the standby line for Peter Pan was 10 minutes.  This is nothing short of a miracle in Disney terms.

There were tons of "vintage" characters out and about, some I haven't seen in YEARS (Scrooge McDuck!).  The Once Upon a Christmas parade was INCREDIBLE.  Seriously.  The parade floats were scented, for crying out loud. 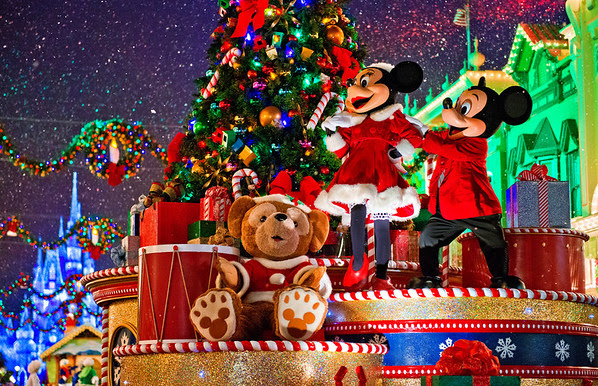 My personal favorite, and Jeremiah's, was the March of the Toy Soldiers.

We scored a FANTASTIC viewing spot, right at the start of the route where Adventureland meets Frontierland.  We got there about half an hour early, got some dinner, and ate while we waited.  It was the only time all night that I felt crowded, and even then it was nothing compared to normal parade nights.

The Holiday Wishes fireworks were impressive, lots of smiley faces and gift box shapes thrown in there.  The timing of fireworks to music was much more coordinated than I ever remember seeing in regular Wishes.  We watched them on the steps of the Diamond Horsehoe, which is a fabulous spot since they moved the launch sites further back from the castle.  We were the only ones there, sipping our free hot chocolate and nibbling our free sugar cookies.  (stations for which were EVERYWHERE, always fully stocked, never crowded, staffed with friendly people, and prepared with carrot sticks and allergy free cookies for those who requested it.  I was not expecting great things from the free hot chocolate, but it was warm and did NOT taste like hot brown water) 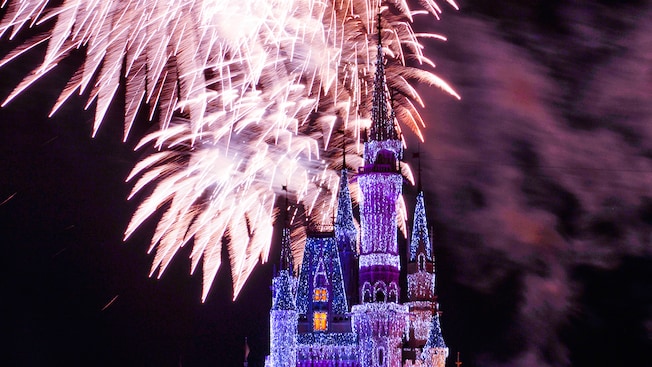 We made sure to get Jeremiah a Happy Birthday button at the beginning of our trip, which led to many many birthday greetings and several instances of special treatment.  He got to share a dance with Belle at her Enchanted Storytime (first time doing that, and it was SO NEAT!) AND he got to drive the Jingle Cruise boat! 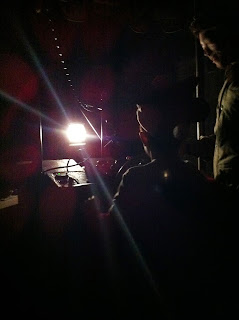 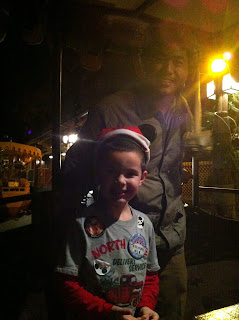 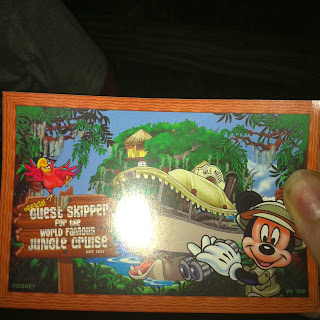 I can safely say that he is the first person I have ever known to earn one of these!

(The "Jingle Cruise" version of the Jungle Cruise was cute.  It was a sad day that they put the skippers on a script, but the jokes they added for this Christmas version were clever.)

We walked straight onto most rides, INCLUDING WINNIE THE POOH, which any parent will tell you is equivalent to winning the lottery.  Jeremiah stepped up in a big way, and rode Splash Mountain for the first time and LOVED it.  Parker spent most of his time yelling, "OOOOOH! OOOOH!" and pointing.  I spent my time, standing in the "snow" on Main Street, wiping away tears like I always do because I am Disneyiculous.  But it really was one of my favorite memories of all! 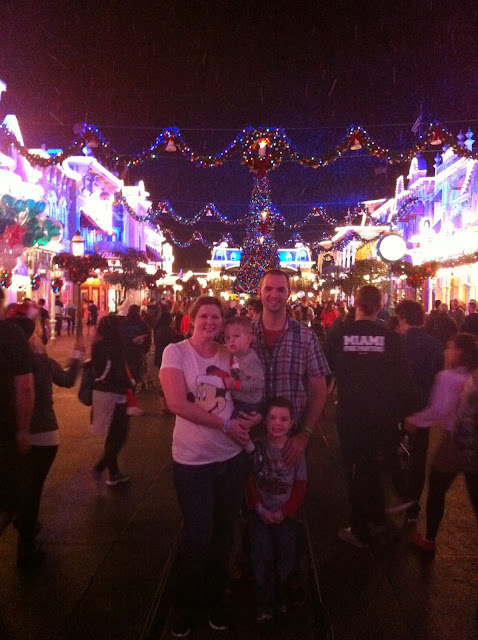 In summary- Mickey's Very Merry Christmas Party....
worth it or not?
It doesn't take a brain surgeon to guess that my answer will be "YES! YES! A THOUSAND TIMES YES!" but there are a couple of caveats to that:

1) The ticket price is steep.  Seriously. Even with discounts (DVC, annual pass, early booking, etc), it will still run you around $60 per adult, $55 for ages 3-9.  I just can't recommend doing this on top of an existing park day ticket, which would bring your cost for that day alone up to at least $150 per person.  Instead, I loved what we did- spent the first part of the day lazing about, enjoying the scenery around the property, and heading over at 4 pm.  We still got 8 solid hours inside the Magic Kingdom, and with the decreased crowd size, we were able to hit all of our favorite rides many times over.
2) If you aren't interested in the "special" parts of the event, such as the rarely seen characters, fancy costumes, fireworks and parade, don't bother.  The free sugar cookies and hot chocolate were great, but not worth a separate ticket price.  The snow on Main Street is the same as the snow over at the Osborne Lights in Hollywood Studios, so it's not a must do.  You can still enjoy the decorations and atmosphere on a regular day at the Magic Kingdom, which is nothing to sneeze at.
For us, it is probably going to be a once every two years or so tradition.  We've never done the Halloween party, so that might be next up! 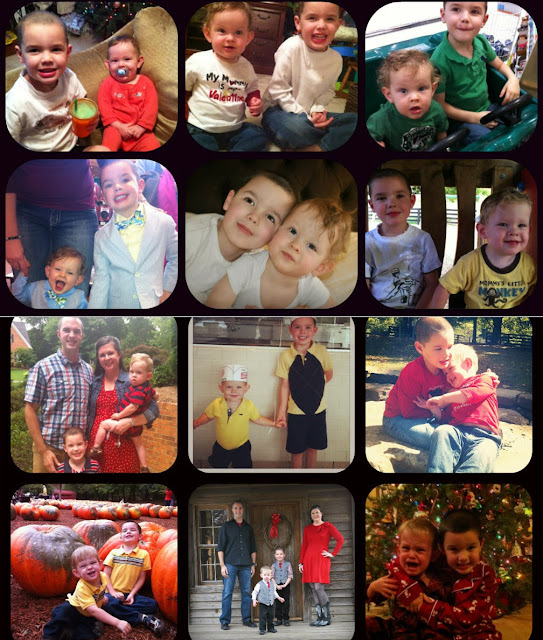 So much to be thankful for.  So many highs, so many lows, and so much to look forward to.  HAPPY NEW YEAR, friends!!