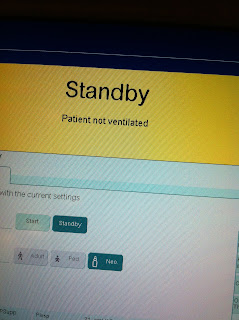 I think all CDH parents take this picture when the day comes.

Just when I thought we were ready for a nice, relaxing weekend-- I walked in to the NICU today to find my P-nut with no breathing tube, some high flow nasal cannulae, and CLOTHES (hospital clothes.  Must rectify that asap)!  For the briefest of moments, I was unsure that I was in the correct bedspace. 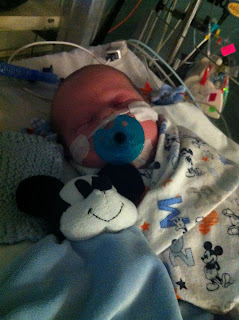 Nurse Lauren had spoken to Mike this morning, and mentioned that extubation was a possibility today.  It was also a possibility yesterday, and it didn't happen.  I figured today would be the same way.  I was still shocked to see it was true!  I could see his face!  His mouth!  He was working with a pacifier!! (which, I might add, is vanilla scented.  I did not know such gadgetry existed)

He doesn't quite know what to make of the pacifier.  I can't blame the guy-- he's had a tube down his throat for three weeks.  He gave it a few good sucks, but mostly he just held it in his mouth.  The fact that he is even remotely interested in it is good news-- CDH babies are notorious for oral aversions and I am hoping to avoid as much of that as possible.  Plus, learning to suck on a paci while breathing is key in the quest for eating one day.
He did alright on the oxygen.  He's on a huge amount of support right now (60% oxygen and 6 liters/minute flow), which is okay for now because his poor body is unsupported for the first time. They skipped CPAP (which would have been the traditional first step after ventilation) altogether, because it aggravates all babies and irritable babies usually don't do well at all with it.  Parker definitely qualifies as "irritable."  You can see evidence of this by his lack of enthusiasm for snuggles with mom today. 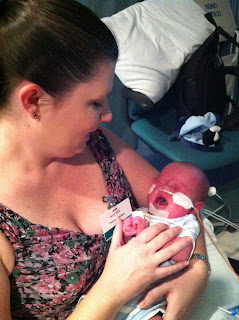 He was foul humored ALL. DAY. LONG.  When you look at it, nobody can really be surprised.  Think of all that he has been through in three weeks-- grown ups would dissolve into a pile of self -pity and loathing after day 3.  On top of it all, he is in severe morphine withdrawal,  Yep... I have a drug addict on my hands.  He's been on huge amounts of morphine for sedation and pain management, and he burns through it exceptionally quickly.  While he was on a constant drip, it wasn't so bad.  Now that he's back to scheduled bolus doses, he's feeling it.  And, like any good junkie, he gets real mad real quick when his "high" wears off.  They upped his bolus amounts today, and he settled down a good bit for the afternoon and evening.  Poor little booger. 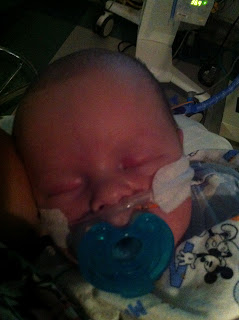 So proud of him.  Such a huge step... and it might be a temporary one.  Lots of babies come off the ventilator and wind up right back on hours later.  Parker did okay today, but every time he pitched a fit, his oxygen levels plummeted (everyone's does, we all just don't have handy red lights strapped to us that tell a monitor to start beeping).  Because he had to start out on such high levels of support, he doesn't have much space to get extra help if he needs it.  If he isn't able to keep his oxygen levels up consistently, fits or no fits, he will go back on the ventilator for a while more.  We will not be upset if that happens, because he has gone WAY above and beyond our expectations this week.  I don't want to push him to far too fast and wind up backtracking!!

Lots of big changes for Parker this week.  Lots of big changes on the horizon (a big boy crib, trying feeds again, and a possible move to the step down NICU in a couple of weeks!).   Lots of big, giant, huge praises for the miracle that he is.  His little life has already been so much more than we imagined, and I can't wait to see what God's plans are for this little one!

"For I know the plans I have for you," declares the LORD, "plans to prosper you and not to harm you, plans to give you hope and a future."
--Jeremiah 29:11 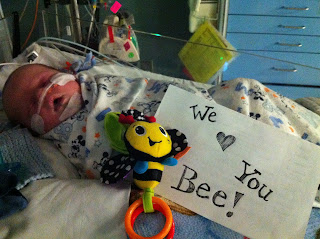 Please, dear friends who have offered up so many prayers on Parker's behalf, join us in praying for his CDH lady friend Bonnie (aka "Baby Bee").  She was born Thursday, and is currently on ECMO in Charleston.  She's feisty, and we love her.  Click HERE to follow their story.