Happy Four Week Birthday to the P-Nut!  Hard to believe.  It feels like 4 months.

First off, apologies for the lack of updates.  It's due in large part to not having much news... we were told by the neonatologist that this would be the long, drawn-out boring part of the whole thing, and it is.  We're past the major crisis moments of a CDH baby, and (barring some nasty flareup of pulmonary hypertension, which he has a mild case of) now it's just a bunch of very slow maneuvers towards home.

He's still on oxygen, and the settings haven't changed much.  This concerns me as a mom, of course, but the doctors aren't too worried yet.  They are trying to keep him as stable as possible for a while, and "stable" is a medical term for "boring."  We love stable.

His meds haven't changed too much, except now he's on methadone to try to kick his morphine addiction.  (Side note, everytime someone says "methadone," I am immediately transported back to 1999 and in my head plays, "ALL MY HEROES IN THE METHADONE CLINIC!"  Yeah, you're welcome for that throwback.  Somebody has to remember the musical genius that is was Kid Rock.)

The biggest news, medically speaking, is that he is "eating" like a champ.  Granted, he's not doing much except digesting it, but they've been able to up him to full feeds (20 ml/hr) of breast milk through his feeding tube.  There are some reflux symptoms, which is almost a guarantee with CDH babies.  Still, we are encouraged by the fact that he has tolerated full feeds.  The next step will be to start condensing the same amount of milk into shorter periods of time, simulating how a normal baby eats throughout the day instead of continuously.  He ADORES his pacifier, so I am hopeful that oral feedings, when the time comes, will not be too much of a challenge. That won't happen until his oxygen settings come way down.  Slow slow slow.

The BIG BIG news of this week, non-medically speaking, is that Jeremiah got to visit today.  He has been asking and asking and asking.  We have been saying, "Parker is sleepy.  Parker doesn't feel very well.  Parker has doctors appointments."  Basically, we felt that there was no way on Earth we'd bring him in while Parker was on ECMO, and we didn't feel too great about it while he was on the ventilator.  Now that the P-nut looks much more like a regular baby in a regular crib, we felt like now was a pretty good time.

Robin, the child life specialist at Egleston, met with me Wednesday to chat through how it would work best with Jeremiah's personality.  She spent alot of time with me talking it through, and gave me this handy dandy coloring book to take home to prep Jeremiah. 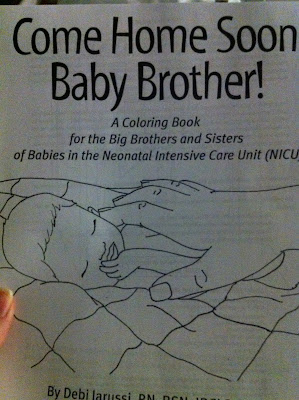 People think of everything!

He donned his Big Brother wear (t-shirt and badge from Northside).  We arrived this afternoon, and Ms. Robin met us in the lobby to get Jeremiah warmed up.  She had all sorts of exciting "doctor's tools," as Jeremiah called them, including a baby doll with all of Parker's gadgets attached to it.  She went though all of them and told him what they were for, let him touch them and play with them, and reminded him that they were all there to help Parker.  Nothing to be scared of. 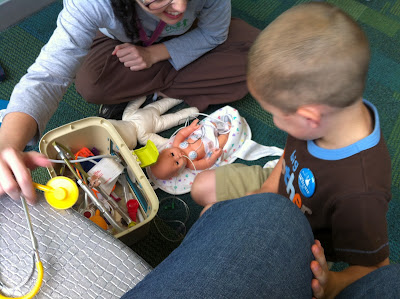 Finally, it was time to head back.  He was so very excited.  We scrubbed in and walked over to where baby Parker was ready and waiting.  He had on his Little Brother t-shirt from Nesie and Greg, and he was excited to see Jeremiah!

That's a lie.  He spent the whole visit completely zonked out.  Alas.

Still, Jeremiah was an absolute angel.  He had practiced a song to sing ("Rock a Bye Parker") and had practiced walking on quiet feet and using a soft voice.  We lowered the crib rail, got him a stool, and let them introduce themselves. 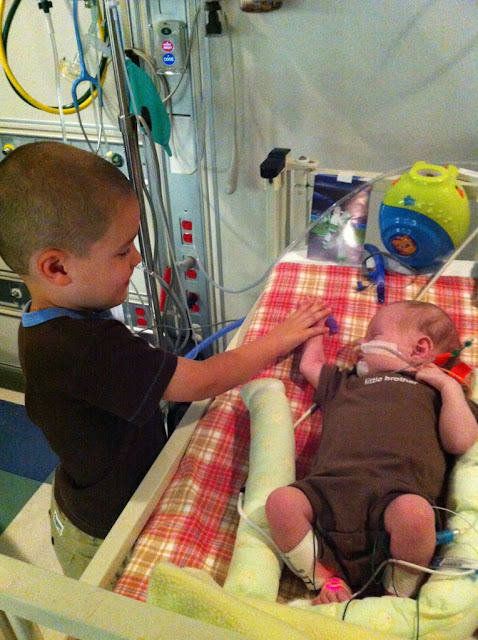 Totally tear up every time I look at this picture.  I like how my friend Jill phrased it,
"Start of a secret handshake!"

It was a quick visit, but it worked great.  To Jeremiah, Parker has been a nebulous entity that was first in my belly and then at the hospital.  He's seen pictures of him, but until today I'm not sure he actually bought it that there was an actual Baby Parker who lives at an actual hospital.  It was a sweet, sweet time.

Our visit ended on a sour note, God bless his soul.  We went down to get lunch from the cafeteria.  Along the way, some very nice random woman gave Jeremiah a (GIGANTIC) Thomas balloon.  We decided to eat outside, and tied the balloon to a bench while we went through the line.  Upon our arrival back in the garden, not 7 minutes later, Thomas was a victim of the heat.  He had exploded.

The situation was quickly remedied by a field trip to ToysRUs to spend his gift cards from Cadillac Jack, Dallas, and Tug.  All was right in the world after that.

Still can't believe how well this week started, and I am speechless when I think of how it ended.  There were a whole bunch of times during my pregnancy that I just wasn't at all sure we would ever be a family of four.

And here we are. " Every good and perfect gift is from above, coming down from the Father of the heavenly lights, who does not change like shifting shadows."
--James 1:17
Posted by Abby at 11:43 PM