Parker's Goals for this Week:

1)  Lose foley catheter, avoiding drama in the process
2)  Get rid of some medicines
3)  Clear stomach gunk

1-- check!! It came out today, no bleeding, no signs of permanent damage, and he's peeing great on his own.

2-- check!!  Milrinone (a medicine that helps his heart beat stronger to force the blood through the vessels) is all gone.  Morphine drip is already cut in half-- he will be put on bolus doses instead of a constant drip as soon as possible.

3-- check!! They have turned off the suction to his Anderson tube, which has been in place since birth.  Its original purpose was to pull out all the air and bile from his stomach and intestines, keeping them from taking up chest cavity space and also making them easy to move during surgery.  Since surgery, the tube has been sucking out the bile that was backing up into his system, but now he's pooping and everything is moving along nicely on its own so the tube is no longer necessary.  They left it in with no suction today, only gravity, and should pull it out tomorrow.

All three of these things combined mean that Parker SHOULD start attempting feeds pretty soon!  They will start him with a feeding tube and approximately 3 drops of milk a day.  I am not really exaggerating... there is no telling how his digestive system will respond to stimulation of any sort, and reflux is almost guaranteed.  Still, I am anxious to start down that road!

I am also anxious (understatement) to hold him!!!  It has been 3 weeks and I am in dire straits.  Now that he's less scary to me, I am ready to scoop him up and not let go.  Methinks that is frowned upon in the NICU, so I will wait for clearance from the doctors and nurses.  It cannot come soon enough for me, but I also carry around a large fear of everything going to hell in a handbasket the second they hand him to me.  It's coming, hopefully sooner than later!

His ventilator settings are ridiculously low-- so low that they call it the "holding" settings where the machine is really not doing too much for him (let me see if I get this right-- oxygen level at 23, rate at 15, pressures at 21 and 7).  He's breathing over it really well, and his blood gasses are great.  They won't take him off the ventilator anytime soon, though, because they want to be absolutely sure that he can handle it before they extubate.  I am more than okay with that-- I've come to look at the ventilator the same way I looked at ECMO. Nobody wants to end up on it, but when it's time to come off, you realize how nice it has been to have control of the situation.  We're a ways off from that, but it's on the radar since Parker has had such a good week.

I'm not quite sure what to make of this good week.  Mike and I are ever so slowly starting to feel more confident that he WILL come home-- we made it past ECMO, past surgery, and his hypertension situation isn't currently a concern (per his surgeon.  Am going to get neonatologist's opinion on that tomorrow).  I know he's still on a ventilator, still hooked on drugs, and has to learn how to eat.  I get it... but we lived in "our child has a 50-50 shot at survival" for so long, and I am not quite sure if we are still there.  I don't feel like we are, but I'd like somebody else's opinion on it.  I know there are no guarantees, there is no set timeline, and it could all change at the drop of a hat. Fine.  I've heard that for 6 months.  I just need somebody to confirm that we've made as much progress as it FEELS like we have!!!


Whatever the answer to that question is, we are so proud of our P-nut and his fighting spirit.  I had Storytime Shift tonight, and I spent the whole time watching him sleep (peaceful baby sleep, not doped up baby sleep) and marveling at all that he's done in less than 3 weeks.  Love him so. 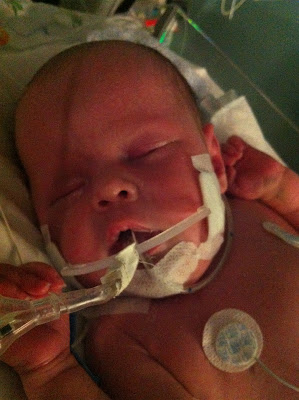