The P-Nut Makes His Premiere

Y'all.  I don't even know what to say.  We have been absolutely AMAZED at the messages and donuts and prayers we have gotten today.  My entire Facebook feed is people either asking for prayers for us or pictures of donuts from across the United States.  By some complete miracle, this little blog has gotten almost 5000 views so far TODAY ALONE.  We are overcome.  Thank you doesn't cut it.

Noowwwwwwwwww... on to the big news! *and crummy camera phone pictures, but ya do what ya can*

Parker Edward Knoll arrived at 7:02 am.  He is 21.5 inches long and 7 lbs 15 ounces.  He came out crying (which was the best sound I have ever heard, even if the docs don't like CDHers to cry!), and fought the ventilator until he was given his paralytic.  He is perfect, and he is strong. 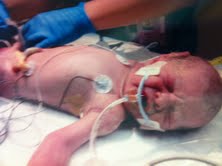 We arrived so very early this morning, and went in for pre-op.  True to form, I took 5 rounds of epidural medicine before I was sufficiently numb.  The anesthesia department here probably doesn't like me much!  Mike and I did okay, for the most part.  Anxiety, tears, prayers.  I have to hereby rescind my previous comments about the neonatologist-- it turned out she WAS working today, and it was a completely different experience.  Everyone in the OR (and it was A LOT of people) was kind, compassionate, and reassuring.

Parker made his grand appearance, and was quickly assessed by the respiratory team.  He was intubated in the OR, and we spent a few minutes watching him from across the room.  Once he was stablized, the team asked Mike to accompany them to the NICU while I got stitched up.  Dr. Sermons finished up, came around the drape, and wordlessly dropped a surgical mask "kiss" on my cheek before he left.  I adore him.  The assistant surgeon said, "You must be somebody, 'cause he doesn't go kissing on everybody!"  Off to recovery.

Mike and I were in constant contact by phone, and he sent me results of his preliminary tests.  1 minute APGAR was 7, 5 minute APGAR was 8.  Given that it's a 10 scale, with a 10 being virtually impossible to attain, we were happy with that.  They did a chest xray to ascertain what organs were where.

I was disheartened when I saw this.  SO MUCH INTESTINE on the left side.  Mike and I texted furiously, and he assured me that the air pockets in the intestine were making it look worse than it is.  The neonatologist saw a fully developed right lung with perfect breath sounds, and she heard breath sounds about 75% of the way down his left lung area.  It could be that there is plenty of left lung, but the view is obstructed by intestine.  Still, we were finally able to get a definitive answer that only stomach and intestine have herniated.  No word yet on the size of the hole, but it appears to be pretty big.

My body betrayed me in the recovery room... due to the amount of epidural drugs I required, I was shaking uncontrollably.  That's normal, but even post-op they couldn't calm my limbs down.  They proceeded to wrap me in heated blankets from head to toe.  I mean straight up mummy style.
It was a low point.  There I was, alone in the recovery room, listening to the happy gurgles and coos of the other c-section babies, SWADDLED AT THE AGE OF 30!  Pity party.

Mike texted that the transport team had arrived, and that Parker was stable enough to visit me before hitting the road.  Parker's traveling entourage of 6 wheeled him in, and I must say I was most impressed by the contraption in which he would be moved.  They let down the sides of his isolette, and Mike and I finally got to rub his little hands and his gigantic, sloth-toed feet.

﻿I told him over and over and over again how much I loved him, how proud I was of him, and that he had to be strong and put on his boxing gloves.  It was so hard to see my P-nut rolling away, but the transport team was wonderful and I knew he'd be in good hands.

Parker got settled at Egleston, while Mike and I settled into our new home.  Let me tell you something-- if you don't have a baby with you, you are virtually ignored!  When we had Jeremiah, it was impossible to get any rest at all due to the constant vital sign checks for me and the baby, the constant comings and goings, etc.  This go round, I have been put in a very quiet corner of the hospital, and my nurses have left me alone for the most part.  They are very sweet, very on top of things, and supersensitive to the fact that I am babyless.  I have spent the day, blissfully alone, watching Food Network and napping between updates from Mike.  I was mentally able to transform my clear liquid diet into Anne Burrell's Meyer Lemon Pancakes as I watched.

**that's a lie**
Parker arrived at HIS new home, and the rest of the tests (brain scan and echocardiogram) were performed.  His brain is completely clear, and the echo looks great.  What did NOT look great were his oxygen and CO2 levels-- in the upper half of his body, he was in the 90s.  In the lower half of his body, he was in the 70s (this is the better of the two situations-- his upper half, including brain and most organs, are well oxygenated.  Praises for that!) He wasn't ridding himself of CO2 in a timely manner, and it was escalating his blood pressure.  They tried various ventilation techniques and meds, but it wasn't working.

While Mike was en route to be with the P-nut, Egleston called my hospital room and asked for verbal authorization to put him on ECMO.  I surprised myself with my lack of reluctance or fear.  I have every confidence in the medical team, and if that's what they think will work, I told them without hesitation to go ahead.  They said they'd hold off on the surgery to insert the cannulae until Mike got there.
He's now on ECMO (only lung bypass-- his heart is strong enough and performing well for now), and his stats have soared. His color is back, his little tootsies are warm, and his blood pressure has improved.  Most of his meds have been discontinued or scaled WAY back, and even in the few hours that he's been on ECMO, they have started weaning him off.  He's resting comfortably now, with his Mickey Mouse lovey and whispered promises of Disney World.

He will stay at his current ECMO level overnight, and they'll re-evaluate tomorrow.  Even though he's doing great, we can expect him to be on ECMO for about a week.  After that, we'll start figuring out repair surgery and what's next.

I have to take a minute and give my husband the biggest shout out ever.  He has been completely in charge of Parker since the second we checked in this morning.  He has been amazing.  He only fell apart once, when he first got to Egleston, and other than that he has been a ROCK.  He asks questions, he gets answers, and he just helped me do the C-section shuffle to the bathroom and back.  He's visiting me to sleep for an hour before he heads back to Egleston.  I know he is exhausted and scared, but he is doing a phenomenal job.  I am a lucky gal, and JB and P-nut are two lucky boys!! 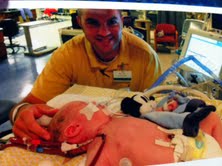