Peace and Quiet and Midnight Shouting

Day Two of Parker's life has passed fairly uneventfully.  For this we are grateful.

Last night, Mike and I slept like the dead.  The night nurses were fantastic about spreading out their check-ins as much as possible, so we slept pretty soundly for 9 hours.  Going on less than an hour of sleep since Wednesday, it was much needed!

I did totally shout at the night nurse when she came in one time.  I have been keeping my room at what feels like a comfortable temperature.  Everyone else says they can see their breath.  Hooray hormones.  Regardless of the frigid atmosphere, when sweet Suzzette popped her head in at some point during the night, my head registered that I was hot and she was standing right by the thermostat.  Coming out of a near coma, in my attempt to ask her to turn the temperature lower, all I did was yell really loud, "I AM SWEATING!"  and then went completely back to sleep.  It registered on some level that it might have come out wrong, but I couldn't emerge from the darkness to rephrase.  Whoops.  I think she got the message, though, because when we woke up even I was cold!!

They yanked all my cords, IVs, and whatnot so I was free to shower first thing this AM.  There really aren't adequate words to describe that first shower after a c-section.  It was delicious to wash my sweaty bed hair.  I tossed my surfboard print hospital gown for some stretchy yoga pants, and I feel like a million dollars!  I have been scooting around my room and up and down the hallway all day, I haven't needed any percoset, and I GET TO GO HOME IN THE MORNING!!  Dr. Sermons arrived, checked everything, and wrote my discharge papers for first thing tomorrow.  So so so so excited, but it is a probationary release.  If I do not take it easy, and if I undo all of his hard work with tomfoolery, he will have my hide.  I fear the wrath, so I shall behave.  I negotiated my driving restriction down to one week, which is more than fine.  CANNOT WAIT to see my little man tomorrow!

I got to see my first little man today.  Jeremiah came for a visit, as did some of our family members.  Jeremiah was most pleased to receive his "I'm a big brother!" pin (it lasted about 4 minutes) and to know that there was a McDonald's in the hospital.  He misses us, and wants to be with us again, but seemed satisfied that we'd come get him tomorrow.  He has been mercilessly spoiled by Naner (my sister) and Granny/Grandpa, so his protests have been minimal. :-)

Parker's day started out with a bang-- while Mike was helping me shower *so not as exciting as it sounds*, we missed a call from the NICU.  Parker's catheter was leaking blood, not urine.  They called in a urologist, who determined that it had not gone in straight to the bladder but instead to soft tissue.  I think Mike's manhood retreated into his belly for a few minutes.  The urologist fixed it, and they are running some extra antibiotics to prevent any accidental infection.  He's peeing up a storm now, so that issue should be resolved.  That whole series of events caused some minor ECMO issues due to fluid retention and him being uncomfortable, but now he is back to being stable.  They've taken off one of his BP meds (I don't know specifics, as my husband is a boy and doesn't relentlessly ask questions and write down every minute detail like I will compulsively starting tomorrow) and backed off the ECMO even more.  His blood pressure is running a bit low, so they are manipulating his dopamine to find out how little he can have while maintaining a good pressure.  He's off his paralytic, and is trying to breathe on his own.  He's started waving his arms and legs a bit, and though he hasn't opened his eyes, he seems to be responsive to Mike's voice. (As I type this, I got a text they are having Daddy/Boy Storytime with Mike Mulligan and His Steam Shovel before Mike comes back to the hospital for our last evening).

I might have just FaceTimed with Parker.  I might have gotten a bit weepy.  I told him to behave, to take his medicine like a good boy, and that I'd be there in the morning.  It is gut wrenching to see him hooked up to 8 million machines, but he looks extremely calm and comfortable, given the circumstances.  I've been channeling my MamaBear instincts into motivation to spend time with the breast pump.  Yeah, 'cause that's more fun than being with my P-nut.  *that's a lie*

12 hours from now, I will get to see my littlest boy.  A few hours later, I will be reunited with my Monster and we shall all arrive at my grandmother's house to spend the week so we can be near the hospital. Hopefully today, and the days after, will be a day much like today-- quiet, restful, with all the Knolls in better shape than they were when we went to bed last night.  What else can you ask for?


**EDITED TO ADD:
Extra creativity points for Kevin, one of Mike's college roommates and groomsmen, for this artstic take on Parker pastries.  He plugged the donut hole with a Munchkin, in hopes that Parker's hernia will soon be repaired.  Love it to pieces.** 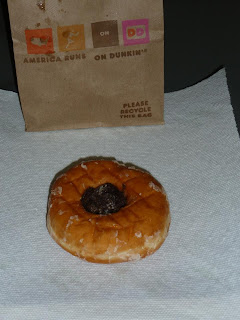