I might have purchased some ridiculously overpriced teenager jeans.

All of this was precipitated by the realization that I have exactly one pair of pants that fit, and those are my maternity jeans.  Unacceptable.

I have never in my life been that girl that people think, "Woowoo, look at her hot little body!" I peaked in fourth grade ballet when I had the most gorgeous legs ever, and it's been downhill ever since.  I'm now a 31 year old mom of two, and the old grey mare ain't what she used to be, that's for sure.  Best pin ever:

It's never been enough to bother me, and I like eating way more than I like skinny. Still, I've embarked upon a quest to get back to where I was before I got pregnant with Parker- when I was running half marathons.  It's a long road, and I'm not going to get back into my half-marathon-running jeans before the jeans season goes by.  Thus, new pants were in order.

I went to every bleeding store and very nearly broke down into tears on several occasions.  Jeans have ALWAYS been a struggle for me (I am the living embodiment of that old bard Sir-Mix-A-Lot's description:  little in the middle but I got MUCH back... Though the "little in the middle" ain't so little anymore. Working on it!!!)

Anyone who knows me at all knows that I have glitter running through my veins.  Rarely do I leave the house without something sparkly on.  I have seen people (mostly 82 pound teenagers) traipsing about in sparkly bottomed jeans, which piqued my interest.  I stalked them online.  I found them at Macy's but stomped away due to StickBarbie next to me saying, "Darn.  These 24 inch waist ones are just too big!"  I talked myself out of it for THREE WEEKS.

Then I hit paydirt-- in my online stalking I saw "Miss Me Curvy Fit".  Curvy?  I AM SUCH!  Another week of online stalking.  That cut is only available at one store, which is at my local mall.  Wringing of hands.  Consideration of ordering online but balk at shipping charge.  Convince self that spending such an amount is sheer madness.

Finally, I built up my courage, loaded up the Sit N Stand, and headed over there.  My plan was to sneak in, grab the biggest size I could find, buy them, and run away.  Tragically, heading into an empty store in the middle of a school day with a gigantic double stroller does not allow you to blend into the scenery.  I was approached by a young man who could not have been more than 20.

"Hello, ma'am!" (aaaaaaaaaand there went my last shred of bravery) "I see you are looking at the Miss Mes.  Can I help fit you?"

I wish I could adequately describe the inner monologue I had at that moment.

"Um... no, thank you.  I know my size."  LIES!  Sneakily grab biggest pants and inch toward dressing room.

"Yeah, lemme grab a few pairs for you to try on that i think will work."  Does not ask what size.  Grabs on his own accord.  Grabs several SEVERAL sizes below biggest ones I had snatched.  I say nothing and plan to put on large pants and get the hades out of there.

"Okay, ma'am, let me put you in our big room.  Are you going to try those on too?"  Blast.  He has spotted the ones I chose.

Sweet voice of my 3 year old, in loudest possible tone:  "Mommy, those pants look wrinkly on you."

After whispering thinly veiled threats if he spoke another word, I noticed in the mirror that he was right.  They were too big. Much much too big.  Hmmm.

I stared quite doubtfully at the tiny pants the 20 year old had selected.  I picked them up and held them up to me.  I put them down.  Repeat. I finally dared to put them on, and the heavens opened and the angels sang.

After trying 120 pairs of jeans, the first ones that fit were selected by a teenage boy. (Okay maybe he was older than that but not in the mindset I was in that day!)  The only problem was that they were too short.  I emerged from the dressing room to find him waiting for me.  Smirking.

He got me the same pants, just longer, and I got the heck out of there.  I stopped off at Macy's to change out of my maternity jeans and into my new Fancy Pants for the rest of the day.

Lessons Learned:
1) "Premium denim" is stupidly expensive, but sometimes, SOMETIMES, they really do fit better.  Or fit at all, in my case.
2)  Sparkly  pockets put some pep in your step.
3)  Teenage boys can guess your pants size just by looking at you.  I can't decide if this is appalling information or not.
4)  We do not appear as large to others as we do in our own eyes.  I can say with certainty this is not appalling information.

We went to a potluck dinner yesterday with some old middle school/high school drumline friends of mine.  We laughed that we are all grown up and growing families of our own, we reminisced, and we looked at pictures from days gone by.  There I was, a much smaller shadow of  my current self, but I cared not.  I sashayed about in my overpriced teenager jeans and thoroughly enjoyed myself. 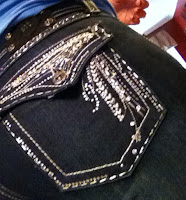