Lots of Good Fun That is Funny

Yesterday was Dr. Seuss's birthday... and Friday was Read Across America Day.  Jeremiah had a ball at school on Friday-- he greeted me at carpool wearing quite festive headgear.  He was pumped because they had read one his favorite books, One Fish Two Fish. 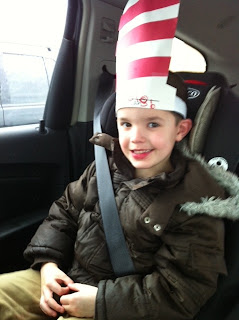 As we drove home, it was round about Parker's naptime, and he was cranky.  He had mysteriously lost his binky in the depths of his carseat, and I of course could not reach it as I drove.  He was not pleased, to say the least.  Those little lungs that we spent so many months praying over were proving themselves to be functioning QUITE NICELY, thank you so much.

Meanwhile, on the Kids Place Live channel on XM, they were broadcasting live from the New York Library  Celebrities were stopping by to do read alouds of Seuss books.  It was a good time.  For me and JB, at least.  The P-nut, not happy.

And then, something strange happened.  Uma Thurman came on to read The Cat in the Hat, and not 30 seconds into it, Parker was completely calm and rode home the rest of the way in happy silence, kicking his little legs and smiling.

Why, you may ask, is that strange?  Because I read that book to him at least once a day in the hospital.  Starting from the day he was born.  It sat in his box of clothes and toys and it was a favorite.  I got my first big smile while reading it to him.  He was completely enthralled by it, even after the hundredth time through.

"The sun did not shine, it was too wet to play..."   Hearing those words  brought back so many memories... sitting by his bedside at midnight during Storytime Shift, before we could hold him.  Propping him up on my knees in the Boppy once we could.   Seeing his little eyes light up while he looked at the pictures. Here's little movie clip I found (apologies for the cellphone camera quality and the fact that I was trying to read and film at the same time!):


Look at my little booger!  Seems like a lifetime ago! Makes me a little weepy.

Coincidence?  Maybe.  But I don't think so.  Since we've been home, that book has been put back in the rotation with the other 5 million we have around here and I honestly don't remember the last time we read that one to him.  And his response was almost instantaneous!

It makes my English teacher heart happy. We have read every day to both our boys since I saw two pink lines on the stick with Jeremiah.  I think it has made a world of difference for Jeremiah, who is consistently described as having the vocabulary of a grown-up.  I got proof on Friday of the impact it had on Parker, even during his newborn days.

All of this to say--
Read to your kids!  Every day!  Big kids and little kids and kids not yet born.  NICU babies who are unresponsive and feel light years away despite being within arm's reach.