I AM SO EXCITED by how many people have signed the White House petition, and how many people have shared it on Facebook.  It's gotten several hundred more signatures just since last night, and that's awesome.  I don't think we'll make it to 100,000 in time, but I am grateful for each of the thousands of sets of initials on there today.

In other news, we had the P-nut's 9 months well check today.  It was uneventful (not even any shots!) and she seemed pretty unconcerned with the crawling-by-St-Patty's deadline the development clinic gave us.  Jeremiah didn't crawl until he was almost 11 months, and he walked pretty soon after, so she thinks Parker will probably follow suit.

Because I am psychotic, I asked her if we needed to see the cardiologist or pulmonologist.  She said, and I quote, "I promise I will tell you if he starts to scare me."

She did, however, state that we can use Easter as our new deadline for stepping ever so gently into the land of sunshine and relaxing about RSV.  Obviously, we are to be continuing to be careful, but that gives us a WHOLE MONTH of happy frolicking in the springtime pleasantness that we were not expecting.  Big news!

The biggest news of the week has been Mr. Big Pants himself-- he *finally* popped his first tooth (they have been lurking just under his gums for months and are just now starting to break through).   He has been remarkably well-tempered about it, and minus a few late night whimpers and Motrin doses, that tooth hasn't given him much grief.

Is there some wood nearby that I can knock on??

He has also decided that it is time to start riding in the grocery buggy and high chair like a big boy.  This gives Abby-the-RSV-fearing-Mommy some hives, but it does mean no dealing with the stupid baby bucket, which I have been carting around in the back of my car ever since we moved him to his big boy car seat. 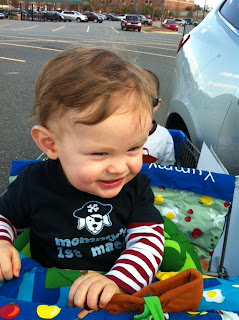 Oh, you grocery buggy cover.  I used it I think maybe thrice with Jeremiah before deciding that it was for the birds and exposing my sweet baby to all that lurks on the communal plastic of America.  I have ever so resentfully pulled it back out to use with Parker.  Wrestling with that thing results in not-nice phrases running through my mind, though I am grateful for the pea pod bolster pillow that props him up when he starts to slump over.   Patiently waiting for the day that I convince myself a swipe with the antibac wipes will suffice and I can leave that thing in the dust.

What I can say about The Great Isolation of 2013 is that it has caused a new appreciation amongst us Knolls for simple things.  We have always been a family on the go-- places to be, people to see.  Since we have been forced to modify our daily routines for Parker's sake, we have re-learned what it means to go out to dinner at an actual restaurant together.  Just tonight, we went to the Olive Garden to use a gift card.  I know, you're thinking, "WHOOOOOOOOOOOAAAAAAA, hang on there crazy folks!  The Olive Garden?? Living on the edge!" But hear me out.

We've been out to eat since Parker's been home, don't get me wrong.  However, it's often a quick meal where Parker is confined to his baby bucket and we get the heck out of dodge pretty quick.  95% of our meals are at home. Tonight, we all four sat at the table, Parker in his high chair with wretched floppy cover and suction cup placemat, and ate a leisurely meal.  Parker has determined that baby food is lame now that he has 14% of one tooth showing, and he shoveled breadsticks and pasta like it was going out of style.  We ate our dinners, had dessert and coffee, and left there, doggie bags in hand, feeling quite pleased with ourselves.

This time last year, family dinner at the Olive Garden wouldn't have rated too high on the Excitement-O-Meter.  Now, though, I have such a new appreciation for the simple pleasures a normal life brings. Of all the lessons I have learned this year, I hope this one sticks.  As our lives get less and less restrictive and more and more normal, I hope I can remember to savor seemingly little things as much as I savored this evening's quasi-authentic Italian food.

Boo to you, RSV season, but I begrudgingly offer thanks for putting things into perspective.
Posted by Abby at 11:40 PM