It's a new month, which means a new neonatologist on rotation.  That bit of things frustrates me a bit-- when you're in the NICU for the long haul, just as you get used to a doctor and his/her way of treating patients, time's up and you get somebody new.  Thankfully, all the doctors in the various parts of the NICU float around a good bit, so they aren't strangers.  Still, new month, new outlook. (Don't get me wrong-- they all communicate with one another, and they're all working their hardest to get Parker out of there, but they all have different ways of going about day to day business!)

I spent a good deal of time with our new doctor today.  She sat with me for a while, outlining her plan for the upcoming weeks.  Her MO-- slow and steady.  She doesn't believe in pushing babies faster than they're ready to go, only to have them backslide.  She's a mom, and made several mentions today about how she tries to think of how her Mom-self and Doctor-self can work together for the good of the patient AND parents.  To that end, she wants to get us out of the hospital ASAP, but not until Parker is good and ready.  That means slow weaning of his oxygen, plenty of time for adjustments, and administering treatments that will make P-nut's jobs (eating and breathing) easiest.  It's not going to happen next week.  Or the week after.  Or likely, this month.

As deflated as I felt to hear that we very well could be here another 6 weeks depending on how Parker does, I was nonetheless grateful to be having discussions of home at all.  Not too long ago, we weren't sure we were making it out of there alive. In the grand scheme of things, another month or so isn't that long to wait.  Still, I am just so very ready to have my chickens all under the same roof.

It hits in the strangest of times-- we went to a 4th of July themed birthday party Saturday night (happy birthday to sweet Lyla!), and Jeremiah was of course suitably attired in his red, white, and blue.  Mike was at the hospital that day, and got Parker dressed.  He sent me this picture and text message: 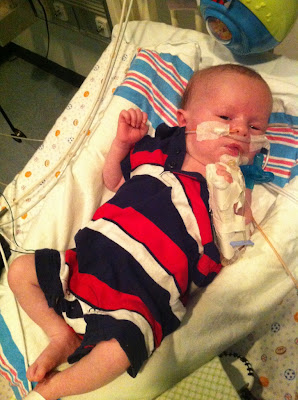 "All ready for the party, Mom!"

I just fell apart, which is most definitely not the reaction Mike thought he would get.  I would have moved heaven and earth to take my little P-nut to that party, and I got hit full in the face with the heartache of leaving him in the hospital to go about life as usual.  It's not a daily struggle like I thought it would be-- I am able to walk out of there everyday and get some degree of restful sleep because I know down deep in my bones he is being very well cared for when we are not there.  I know that Mike and I are doing the best we can to spend time with him.  Still, it sneaks up on me and causes inconvenient emotional breakdowns in the middle of the Magic Kroger.

In other news, Parker's methadone has been weaned further (only once a day now).  He still gets diuretics to keep fluid from accumulating in his lungs, and that hopefully will allow some weaning of his oxygen flow this week.  He's currently on 3L at about 25% oxygen.  When he gets down to 2L, we can start attempting some oral feeding.  When he gets down to 1L, he can move to low-flow oxygen.  THEN we can start talking about getting out of there, even if it means oxygen support at home.
All in God's time.
He knows what Parker needs, and He blessed Parker with a very strong ability to let everyone around him know what he needs.

Parker DID get his first tub bath today, which he enjoyed greatly.  So much so that he fell slap asleep in there.  I did a terrible job of taking pictures. 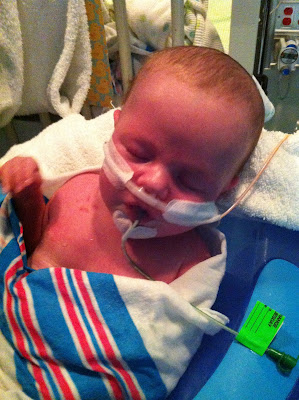 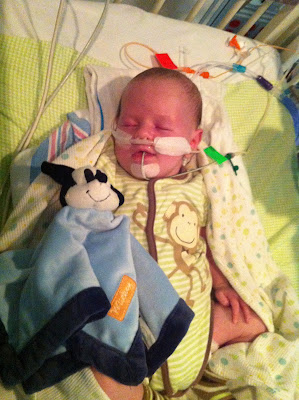