With a title like that, plus the fact that today involved some nekkid times, you might think you've stumbled across some shady dealings here.  Not so!  It's just that this guy is now 9 and 1/2 weeks old, and he tried breastfeeding for the first time today. 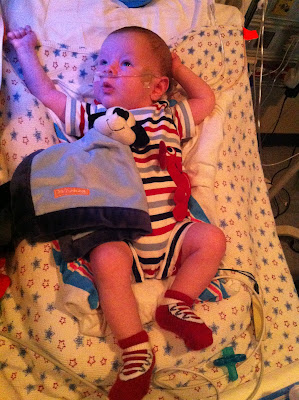 Look how long he is!  He is maxing out that crib.

His initial impressions of breastfeeding appeared to be confusion, disdain, and scorn followed immediately by delight, enthusiasm, and somnolence.  He made it a few good minutes and then just slap passed out.  I'll count it as a good first try, and I'm encouraged that we can make it work.  If it doesn't, and he winds up bottle-fed, that will be equally as wonderful.  Around here we celebrate eating of any kind, be it from a bottle, a boob, or a tube.

Speaking of eating, he's up to 1 whole ounce oral feeds every three hours.  I like to call this "30% of the way to not having a feeding tube."  Today, he was given a full bottle and 20 minutes to see how far he could get.  He made it to 30 ccs, so that's where we will stay for a while.  We will try to push it up bit by bit, with the eventual hope that he can get to the full 100 ccs.  That's a ways off... but he's getting there!  They've also weaned his methadone (one dose every two days), Lasix (once every two days), and Ativan (keeping the same dose from a few weeks ago, and not increasing it as he gains weight.  Eventually, he will outgrow it.)  As he kicks his drug habits, he'll be more wakeful and able to eat better.  Assisting with that is a lower flow of oxygen-- he's already down to .25L and doing great.

In the 4 days since my last post, he is down to one-quarter of Thursday's oxygen level (and has snazzy new low-flow tubes with less tape!), and up to three times as much milk by mouth.  He appears, for now, to have taken the "balls to the wall" path I referenced last post.

WHICH BRINGS ME TO....  More Imaginary Adult Conversations, with a focus on high speed shenanigans.

--I have been given such a hard time for using the phrase "balls to the wall" in my last post.  Everyone has snickered like 11 year olds.  Allow me to enlighten you, oh ye of adolescent mindsets... CLICK HERE and be amazed.  Anyone can go balls to the wall.  Even girls.  Tsk tsk tsk. :-)

--Speaking of girls going ludicrous speed, tonight's drive home from Storytime Shift started with the MommyMobile rolling out of the parking deck to Metallica's "Master of Puppets".  It's hard to be real hardcore when you have the little stick people family wearing MouseEars on your back window.  Still, I cranked it up and hit the highway.  Needless to say, when you have that on your radio and there's no traffic to be seen... let's just say I made it home in pretty good time. 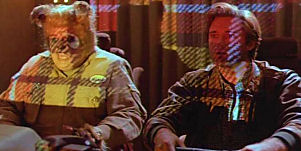 **A final note-- please keep Parker's lady friend Bonnie in your prayers tomorrow.  She has been a total CDH rockstar thus far, and I have no doubt she will continue to amaze everyone. She has some big tests tomorrow, and she needs some spirit sprinkles.  You got this, Bee!**
Posted by Abby at 1:33 AM