Mike and I enjoy jobs.  Checklists.  Measurable goals.  Thus far in Parker's care, our hands on involvement has, out of necessity, been pretty minimal.  In the last few days, though, we've met with the speech, occupational, and physical therapists, and they've given us lots of things to do to help catch Parker up.  It's funny-- you wouldn't think a 6 week old baby could require much in the way of therapy, and he doesn't.  He's doing well with most things (eye contact, looking for the source of sounds, tracking things visually, getting control of his hands, etc.), but our right-now goals are thus:

SPEECH:
-one hour of kangaroo care as many days as possible.  Kangaroo care means skin-to-skin snuggling... Parker in a diaper, me or Mike in a hospital gown (no shirt-- scandal!) with him on our chest.  There are approximately 8000 reports on the effectiveness of kangaroo care as an aid in everything from bonding to treating withdrawal symptoms.  Snuggling with Parker = easiest homework ever.
-Every three hours, at the beginning of his feeds, we can do breastmilk dips with his pacifier.  It helps increase his sucking strength, introduces milk to his tastebuds, and helps him start to think that sucking on something will bring food.  This will help tremendously when we start oral feeds, which will hopefully be end of this week/beginning of next.

PHYSICAL:
-Because he was on ECMO for 10 days, and on paralytics for almost a month, he obviously has some muscle atrophy.  We need to do lots of tummy time to strengthen his back and neck muscles.  I have, in my infinite wisdom (HA!), decided to add "unwrapped time" to this in which I completely unwrap him from his blankets and let him kick and stretch in his bed.  He loves it.  I have convinced myself that this is sound physical therapy practice on top of being just downright adorable to watch.
-His tendency right now is to look to the left-- when he was on ECMO, that's how he was positioned.  Our job is to encourage him to look to his right... when he's sleeping, turn his head that way.  When he's awake, put toys and such on his right side and encourage him to track them all the way over to that side.

OCCUPATIONAL:
-Capitalize on "awake time" as much as possible.  He's a baby, so he sleeps alot.  He's on medication, so he sleeps even more.  His medicine is being weaned daily, but he's still a snoozer.  When he IS awake, we've got to focus on sensory experiences.  He gets tub baths as often as possible now, so he can splash in the water.  He sits in his swing, so he can look around at will instead of staring at the ceiling and experience the changes in motion.  He has lots of visual and musical toys, which he loves.  We read to him ALL. THE. TIME. (poor kid, child of an English teacher).  Translation: homework = play with baby.  Check.

I am happy to have jobs.  The hard part for me and Mike is to remind ourselves that he's not anywhere near as medically fragile as he was, and that it's okay to actually move him around.  That's hard to do after spending so many days being afraid to breathe too loudly around him.  Still, if it will help, we will be there with bells on.  We are overachiever types, which most people would call "nerds," and when given homework, we approach it with gusto.

Yesterday, while I was at the hospital, my dad stopped by and got a good dose of Parker's awake time.  Dad and I stood there and watched him play, amazed that he's just a regular baby underneath all the feeding tubes and oxygen cannulae and scars all over his little body.  Though we might be biased, we think he's pretty darn cute, too.

Baby Einstein Aquarium is the current favorite toy.  He will talk and sing to those fish all the livelong day.  He will reach out and touch them.  And it helps with looking to his right.  (must not become creepy mom where all playtime is measured in sensorimotor development) 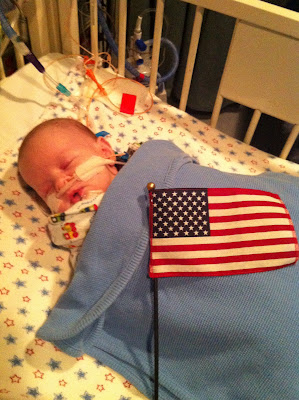 All that playtime wears a booger out.  God Bless America, zzzzzzzzzzzz.......

Last night, we had a fun family outing to the Mall of Georgia fireworks. It was wonderful to be able to spend time together... we just need a P-nut and we will be all set!  We have the silliest three year old on two legs, but I adore him.  Happy birthday, America!