On the Subject of Miracles

This day.  December 22nd.  Until last year, it was a time of recovering from Jeremiah's birthday (more on that later!) and last minute hustle and bustle in preparation for Christmas.

A year ago today, we woke up and dropped Jeremiah off at Naner's house so we could go for our 17 week ultrasound.  We'd know in time for Christmas if it was a Parker or a Marianna!  But I knew.  Even then.  I distinctly remember sitting at the Chik-fil-a drive thru and saying to Mike, "I'm nervous about this appointment."

Parker had chosen to be a drama queen from his conception- after several initial OB visits where we weren't sure he was actually there, one "can't find a heartbeat" appointment, and some recalculation of my due date, we finally were in the clear.  Everything from 10 weeks to 17 weeks was smooth sailing, minus the constant barfing.

Our appointment started with a very clear and unmistakable sign that Parker was a boy.  The ultrasound lady spent a seemingly endless time measuring the heart chambers, and my mommy radar went on high alert.  She stepped out to get the doctor, and when he came back in our whole world changed.  We went from "We're having a boy!" to "We might not have a baby at all."

The next few weeks were such a blur.  I started this blog a year ago today, and re-reading those early posts is almost painful at times.  Mike and I were just plain lost.  We were doing the best we could, we knew we had a hedge prayed around us that was impenetrable, but we were flailing.  We found support from other CDH parents and CHERUBS.  We sucked it up and did the best we could, but at the end of every day, when we slowed down long enough, there was a lurking feeling of dread.

That all changed the day we first saw the cardiologist.  The day I waved my Krispy Kreme in the air while singing David Crowder as loud as I could.  The day I knew in my bones that God was in control of this little boy's life.

Something shifted in me that day.  The feeling of dread never disappeared, but my focus changed.  I can pinpoint the second it happened- during the fetal echo, the tech hit some switch that turned the black and white image into a color one.  (Click HERE to see an example)  Watching his little heart, squooshed and misshapen though it was, beating and seeing the explosions of color nearly brought me to my knees.  How could anyone not believe that God's hands created life?  How could all of these tiny tiny tiny systems be working together, creating another person, without a divine plan for them to do so? I had literally seen the hand of God through the wonders of modern medicine. I had seen a miracle.

"Miracle" is a word we use often around here, especially recently.   I even put it on our Christmas card! (which I wish I could send to all of you.  But I can't, so here ya go!) 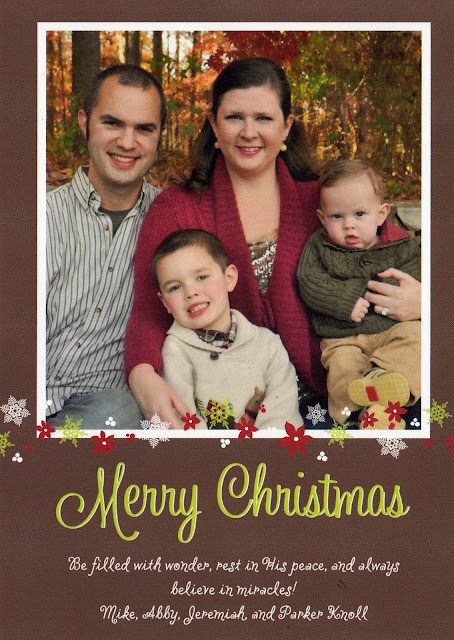 Not a day goes by that somebody doesn't describe Parker as a miracle baby.  And that is very much true. Not just that he survived, but because he existed at all.  My biggest hope for my children, BOTH of them, is that they never lose sight of the fact that they are fearfully and wonderfully made.

Jeremiah was born healthy, which  (when you think about it) is nothing short of impossible.  All of his little systems fired at the right time and he came out as perfect a baby as you've ever seen.  He is a miracle.

Parker's little body, for reasons unknown, had a misfire at 7-10 weeks gestation.  Despite everything else developing normally, that one little blip could have ended his life.  It almost did.  He beat the odds and survived.  He is a miracle.

I said it then and I'll say it now, if you allow yourself to see God's hand in the world around you, everything is a miracle.  That we are able to carry on life as we know it is just downright unexplainable.  Lots of people will do their best to berate me for that belief and will belligerently present proof to the contrary.  And that's just super for them.  For me, however, it's a choice.  A year ago today, I hit a "make it or break it" moment in my journey of faith.  Focus on the science and the statistics, or allow myself to freefall into a place where I focused instead on the beauty of God's miracles, even the less than perfect ones, instead of trying to reason them out.

I chose the latter.  Some people did, and still do, shake their head at my "naivete" for trusting the God of all creation, no matter what the outcome.  It's getting harder and harder to hold onto any slip of faith in a culture that seems to be daily turning its back further on God.  My hope and prayer is that all of us are able to, as the card says,  "Be filled with wonder, rest in His peace, and always believe in miracles."

'Cause the last year has taught me-- they're everywhere.