Of Livers and Lungs

Firstly, I need to thank you all for your outpouring of love and support after yesterday's post. It's funny- Mike and I didn't feel like anything new came to light yesterday, but I guess (similar to how we felt when the surgeon outlined it all in black and white) all of you were somewhat taken aback to see the realities of Parker's condition. As scary as yesterday's post was, the most important idea that I take from it is to celebrate Parker's victories, no matter how small.

Today was a HUGE victory, in comparison to what we've heard so far. Of course, it all came with the caveat of "all of this could change at any given time," but we felt great after our perinatologist visit today. 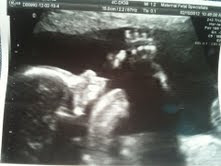 Parker at 25 weeks, giving himself a thumbs up. Or, alternatively, attempting to suck his thumb. Booger.

During today's ultrasound (#16. Bajeezus.), they were able to ascertain four VERY important things:

1. I am not presently carting around any extra amniotic fluid (polyhydramnios). CDH babies are notorious for not being able to process the amniotic fluid they are producing, causing it to build up. If it gets too bad, it can cause early labor. I admit I worry about this, as my belly is HUGE. Seriously, huge. **it might be the donuts... just a thought** Thus far, however, not a concern. Yahoo!

2. We are not dealing with fetal hydrops. Just as I am not carting around extra fluid, neither is Parker. Fetal hydrops occurs when fluid accumulates at various parts of a baby's body. Essentially, it's caused by the heart starting to fail. They check for fetal hydrops every time they look at Parker, and given his lack of heart issues (his four-chamber view was complimented AGAIN today), this hasn't presented as a concern. This is good, because Parker's heart, after birth, will have to go into overdrive to get the lungs back up to speed. The better we're looking before that, the better we should be looking when it's time.

3. For now, his liver position is down. This is one of the biggest prenatal prognosis tools-- even though it comes with the now-standard "we won't know until he's born" caveat. Statistically, babies whose livers have NOT herniated into the chest cavity have a better prognosis. The liver is harder than the stomach, spleen, or intestines, and it can severely impede lung development and heart function. Furthermore, presence of liver in the chest cavity of a left-sided CDH baby (like Parker) usually points to a larger hernia that will be tougher to repair.
That liver needs to STAY DOWN. As he starts to hit his huge growth spurts in the next few weeks, it will be closely monitored. For now, it seems that his stomach and a tiny bit of intestine are all that have herniated. This is somewhat of a blessing in disguise, as the stomach has essentially formed a plug in the hole and seems to be preventing the migration of more organs into the chest cavity. The doctor today described the stomach as a water balloon, being able to fluctuate and fluidly move in and out of the hernia to various degrees. We'd very much like that water balloon stomach to stay where it is, keeping all other players at the digestive party in their homes.

4. He has, at a glance, good lung development. CDH babies' lung growth is compromised by the digestive organs taking up valuable chest cavity space. Parker's right lung seems to be growing great, and his left lung (where the problems would be anticipated) looked pretty darn good today. It's obviously smaller than the right side, but the fact that it's there at all was HUGELY comforting. At my 30 week appointment, they will be doing an in-depth study of his lungs.

Those four things combined, along with watching the most adorable fit of hiccups on the monitor, made for a highly successful visit. He weighs a whopping pound and a half, and he entertained us all with his version of the electric slide. In short, it was most definitely a donut day... but I really wanted a cheeseburger. So I reasoned with Parker-- a cheeseburger is almost as good as a donut!

Y'all- he wasn't having any of it. I plowed that cheeseburger, and within an hour was sick. I dealt with horrible nausea for the first 22 weeks, and I FINALLY came out on the other side. Wouldn't you know it, that little booger taught me a lesson today-- if you promise donuts, you better deliver donuts.

In other news, I have to share this picture (cell phone picture=not very good) of Jeremiah. We had the audacity to explain to him that the Junior Jazzercise class, at which we had dropped my niece Rosie today, was for girls. He. Was. Devastated. Especially when we learned that they would be dancing to music from the Fresh Beat Band and wearing cowboy hats.

Behold, the face of the man who might one day infiltrate the female domain of aerobic dance: 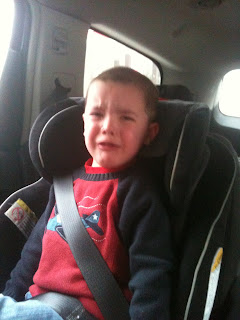