Went to see Dr. Sermons today-- all is well. I was complimented on my weight gain (how often does a girl get to say that??). He assured me that, despite feeling otherwise, my contractions are not worrisome until they become regular and I can't get them to stop by moving. I was given the Orange Drink of Doom for next time. *shudder*

He did an ultrasound on his "POS machine" today. (I think this brings our grand total thus far to 13 from various doctors). He cusses that machine every time-- he says it's basically only good for seeing if there's still a baby in there and if it has a heartbeat. After being at the super high tech perinatologist, I'd have to agree! Still, I got to see sweet Parker's face, looking all sorts of alien like: 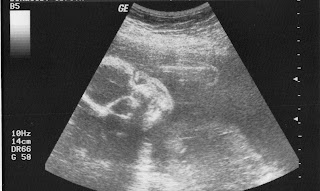 He must have been sleepy today-- he kept rubbing his eyes: 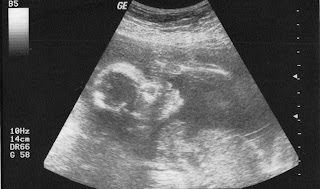 And then he let out a HUGE yawn. It was adorable. (even if he is mine) 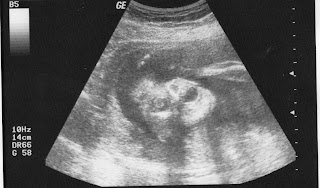 **I guess this could also be construed as the drama queen pose-- head thrown back, hand on the forehead, wailing. Let's go with sleepy baby boy.**

Speaking of sleep and baby faces-- I woke up this morning with what felt like a whole new outlook. It came, I am almost ashamed to say, from the most ridiculous dream about... TARGET. (???-- I know... bear with me.)

In this dream, I somehow managed to deliver Parker via c-section in the middle of SuperTarget. This was not abnormal, as everyone went on about their business around me. Parker was immediately whisked away, and I was told to get dressed and head to the checkout line. I jumped right on up and put on my pre-pregnancy pants (this seemed stranger to me than having surgery in the Target) and headed to the cashier. There, waiting for me on the conveyor belt, was Parker. He was swaddled, and had no tubes except a feeding tube in his nose. Somehow, in looking at him, I understood that in the amount of time I had spent getting dressed and walking, Parker had had his surgery and was ready to go home. The very kind checkout lady informed me that the feeding tube could come out in 24 hours and that I was free to go.

So why did this dream have such a huge impact on me? Because I SAW him. He had a headful of dark hair and dark dark eyes. He looked right at me. He knew who I was, and that I would take him home from the SuperTarget and love him forevermore. It sounds so completely stupid when writing it out, but the main point it this:

From the beginning of this pregnancy, the situation has been tense. There was no detectable baby on the first ultrasound. Then there was a baby but no heartbeat. Then there was a baby with a heartbeat AND a birth defect. It's been one thing after another, and Mike and I both have had a hard time getting into the "groove" of it all. Feeling him move and kick has been a huge help, seeing him on ultrasounds has been a huge help. For some insane reason I cannot explain, seeing my imaginary baby on a conveyor belt at Dreamland SuperTarget helped. I woke up, for the first time in the entire 24 weeks I have been pregnant, feeling 100% connected to my precious baby Parker.

Pregnancy hormones are a beautiful thing. I can only imagine the number of furrowed brows on y'all's faces right now... let's just sum it up with